Each trainee is screened by qualified medical professionals upon arrival at the BMT reception center and anyone identified as a potentially infected person would then be isolated from the rest of the population and provided treatment. During the screening, all appropriate Centers for Disease Control preventive guidelines are followed by health care personnel. As of publication, no trainees have been identified as positive with COVID-19.

Lewis, age 54, pleaded guilty to a one-count information charging him with “Federal Program Fraud.” From 2006 to August 2019, Lewis was a tenured professor at West Virginia University in the physics department, specializing in molecular reactions used in coal conversion technologies. In July 2017, Lewis entered into a contract of employment with the People’s Republic of China through its “Global Experts 1000 Talents Plan.”   more...
United States’ only heavy icebreaker completes Antarctic Treaty inspections and resupply mission 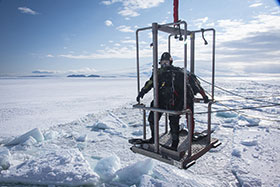 The Seattle-based 399-foot, 13,000-ton Polar Star created a 23-mile channel through the ice to McMurdo Sound, which enabled the offload of over 19.5 million pounds of dry cargo and 7.6 million gallons of fuel from three logistics vessels. Together these three ships delivered enough fuel and critical supplies to sustain NSF operations throughout the year until Polar Star returns in 2021.

The Vigilant crew's efforts during their patrol led to the seizure of 2,155 kgs of cocaine, 30 lbs of marijuana, and one pound of amphetamine valued at $81.7 million, and the detention of eleven suspected narco-traffickers.

While on patrol, the Vigilant crew interdicted three suspected drug smuggling vessels with two of the interdictions both occurring within a 24-hour span.   more...
Conservation Funds Available for Michigan Farmers
EAST LANSING, MI – Michigan farmers and forest owners who submit applications by March 20, 2020, will be considered for the current selection for U.S. Department of Agriculture conservation financial assistance. Conservation financial assistance is available for implementing a wide variety of practices to reduce soil erosion, improve wildlife habitat, protect water quality and manage private forest land. Cover crops are one of many conservation practices eligible for financial assistance through the USDA Environmental Quality Incentives Program.

Establishing cover crops is one of many conservation practices eligible for financial assistance.

“Helping Michigan’s agricultural producers improve conservation on working lands benefits everyone,” said USDA State Conservationist Garry Lee. “This funding will help farmers and forest owners protect our natural resources including our lakes, rivers and wildlife, while producing the food and forest products we rely on.”

“Providers that bill for unnecessary services and devices contribute to the soaring cost of health care,” said Assistant Attorney General Jody Hunt for the Department of Justice’s Civil Division. “The Department of Justice holds accountable those providers that impose unnecessary treatments upon patients and pass the inflated costs on to federal health care programs.”